People typically take precautions to avoid serious illnesses. We politely cover our mouths and noses during coughs and sneezes to prevent spreading germs.

We wash our hands frequently. We keep a first aid kit for cuts and stings and have a thermometer handy to check for fevers. Then, as we age into our 60s, our doctors consistently remind us to stay up-to-date with immunizations for influenza, pneumonia, shingles, tetanus and pertussis.

Health organizations regularly inform us about the warning signs for heart attacks, strokes and various types of cancer. However, there’s another serious health condition that you may not know much about called sepsis, which is sometimes referred to as blood poisoning.

Sepsis is a potentially life-threatening condition caused by the body’s overwhelming response to an infection. It can lead to tissue damage, organ failure and death. Sepsis often occurs with infections of the lungs, urinary tract, skin or gut. Some common bacteria that may cause sepsis include staph, E. coli and strep.

Sepsis results in fever, rapid heart rate and breathing, and an increased white blood count. Severe sepsis means organs may be failing. This can progress to septic shock with dangerously low blood pressure, which can lead to lung, heart, kidney or brain failure. That’s why it is essential to get medical treatment immediately at the first signs of sepsis.

More than one million Americans develop severe sepsis each year. While sepsis can occur in anyone or at any age, it happens most often in older adults. Approximately 65 percent of sepsis cases occur in people over the age of 65.

Here are four reasons why older adults are especially vulnerable to sepsis:

Given the potential risks and long-lasting consequences, it’s important to know the signs of sepsis. According to the CDC, sepsis may include signs of infection, such as vomiting or diarrhea as well as any of the following symptoms: 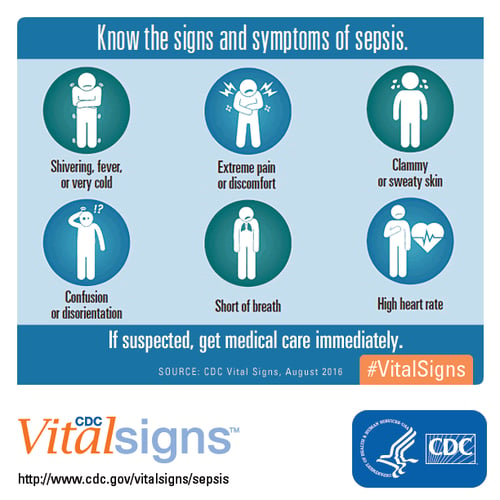 “Another change you may see,” said Sharon Holmes, ComForCare and At Your Side Home Care director of nursing and accreditation, “is that the skin may become blotchy or bluish in color.”

The CDC advises that if you suspect sepsis in yourself or a loved one, call your doctor or go to an emergency department immediately. Be sure to say, “I am concerned about sepsis.”

Be aware that in addition to the symptoms listed above, elderly people may exhibit nonspecific signs of sepsis, including altered mental status, delirium, weakness, falls and urinary incontinence.

ComForCare and At Your Side work with health care providers to support the well-being, dignity and independence of older adults. Our goal is to help seniors live as independently as possible. Count on us for help when you need it.