Boomers face a lot of stereotypes, not the least of which being that they tend to be, let’s say, less than fantastic drivers.

But like most stereotypes about boomers, this one is rightfully being refuted before our very eyes.

This article takes a look at statistics involving boomers, their driving habits and the rate of fatal accidents in which they’re involved, coming away with some eye-opening findings.

To begin with, boomers are driving more than their forefathers and foremothers, and retaining their licenses longer than them to boot.

Many explanations can be given as to why that’s so. But regardless of why boomers are driving more and longer, Jessica Cicchino, a senior research scientist at the Insurance Institute for Highway Safety, took away an important truth from the findings: “As a group, (boomers are) fitter to drive than previous generations…It seems they’re changing what we thought an ‘older driver’ is.” 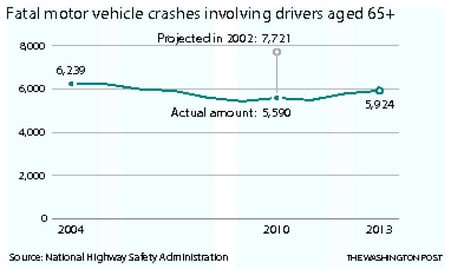 Between 2004 and 2013, fatal accidents for all age groups in the study fell by 24%. Those findings are in contrast to depressing predictions about older drivers made years before, going a long way toward refuting discrimination boomer drivers may face.

The ability to get around for pleasure—in contrast to getting around only for the essentials—is something the article associates with preventing depression and physical illness. That being the case, the value of boomers driving is apparent.

As the first generation raised in an environment in which cars were ubiquitous, it’s no surprise that boomers are keeping with their beloved car until late in life. For boomers, cars provide the same appeal they did when they were first given the keys to their first car. Autonomy, independence, excitement—these feelings are universally associated with being able to get out and drive and never go out of style.

There does, of course, come a point when driving is simply unfeasible for anyone. To that end, the article also touches on the importance of building communities around seniors to help them maintain the same level of independence as is afforded to them through the ability to drive. Providing more public transportation, shuttle van services and other helpful means of getting around—even self-driving cars were mentioned as a possibility—will prove invaluable as the oldest boomers begin to reach their 70s and 80s. As with many other facets of society, creating communities that help seniors live their lives to the fullest extent will in turn create a benefit for people of all ages.